First Snowfall of the Season 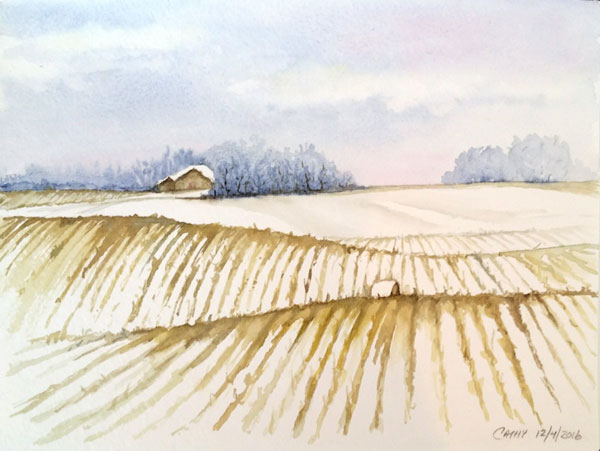 We had our first snowfall of the season last night and this morning.  I've never painted a watercolor snow scene before.  I've done them in oils but not in watercolor, so I decided to paint what I saw out my studio window.  I had to improvise a bit with the sky and introduce some color since it is pretty drab and hazy out now that the snow has stopped.  There is a lonely round bale standing in the cornfield.  It is slowly sagging and losing shape - I suspect the deer have contributed to its demise as I sometimes see them out there.

How:   With snow you leave the white of the paper show through and just paint the shadows.  Use lots of blue to depict the cold.  If you wanted to mix a cold blue you could use Cobalt and Payne's Gray together.  Payne's gray also works nice for the shadows in the snow.  I wet the sky and then dropped some blue in, wiped out the clouds with paper towel and added a little gold to the tops of the clouds, a little payne's gray at the bottom of the clouds, blotted again.  Dropped in a little Alizarin Crimson in the sky toward the horizon and toward the top.  Painted the trees while the sky was still wet so they would soften on the edges.  Made the foreground trees darker than the background trees to make them appear closer.  Added details only to the foreground trees.  Painted in the corn rows with some yellow ochre and dropped in some of the blue while it was still wet.  Pulled up random stalks.  Added a little shadow to the snow with Payne's gray wash.

Posted by Cathy Michels at 2:24 PM