Well, I went off of the grid again for a bit.  I was busy finishing up some work obligations so that I could retire.  And, yeaaaa, I did it!  On May 12th I turned in my keys and headed out the door.  Some have asked what I will do with my time now.  :)  These are obviously people who don't know me.  I don't even attempt to answer that one since the list would be way too long and might give them serious concerns about my sanity. 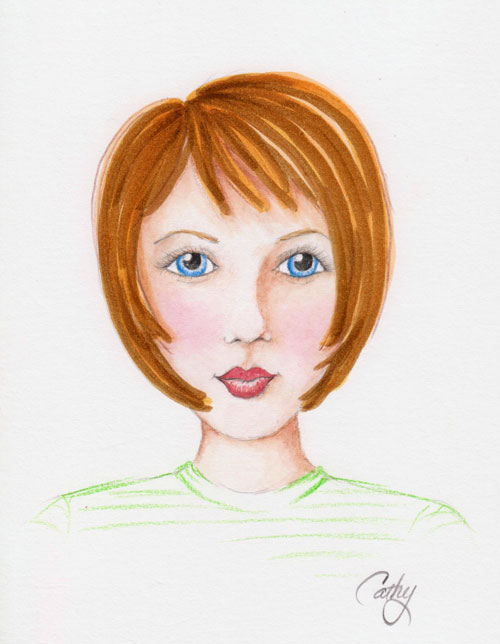 Meanwhile, back at the drawing board...  I signed up for another class or two with Martha Lever.  I had been admiring her whimsical girls and decided to take her 'Drawing the Girls' class.  She works mostly with Copic markers.  However, I have never invested in Copics.  I tried one and did not like the way they smell and how heavy they go on and bleed through the paper.  So I did a little experimenting with the multitude of media I already have on hand.  In the end, I used Cretacolor AquaMonolith watersoluble pencils and Caran D'Ache Neocolor II watersoluble wax pastels for the face.  After applying the colors, I blended them with a damp brush.  I'm happy with the way this worked.  For the hair I used various water based markers that I had on hand - Koi, Winsor & Newton and Tim Holtz brands. 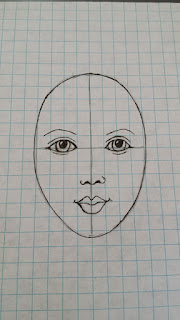 I worked on Strathmore Mixed Media paper.  First I drew a basic face on graph paper and then outlined it with black ink so that I could use this again and again for practicing.  I just place the graph paper template under my mixed media paper and work on top of my light box to trace it.  Then I can sketch different hairstyles and clothing before I proceed with color.

The class is a good value and I think it will be fun to add these girls to my cards and journaling.

Posted by Cathy Michels at 1:52 PM