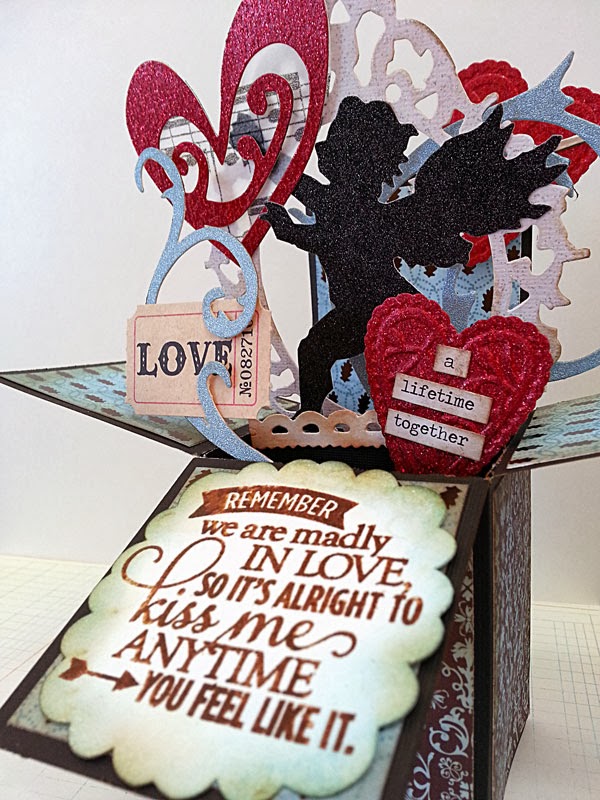 Hope you had a great Valentine's Day and a wonderful weekend.  We are experiencing blizzard conditions this morning and as I look out my studio windows, I feel like I am trapped in a snow globe.  Snow is coming down fast and furious and swirling all around.  The power was off early this morning, but a timely call to the power company got us back on line.  Enough about the weather...time to share what crafty goodness I have been up to.

I make most of the greeting cards I give and I try to make an extra effort at Valentine's Day.  The grandkids have grown to expect my handmade cards and so has my husband.  In fact, he always looks expectantly to see if it is an original, so I hate to disappoint.  When I saw Shelly Hickox' Valentine Pop-Up Card I knew I had to make one.  I can't claim much originality on the first one because I followed her sample pretty closely.  I had many of the Tim Holtz Dies she used and a couple she didn't.  I saw this cute little phrase in the Silhouette store and knew it had to go on my Valentine to my husband.  We have been married over 40 years so sometimes we need a little reminder to keep the romance in our marriage.  :)

I used brown and blue cardstock to keep it from getting too girly.  I made a rubber stamp with the phrase and stamped it on some cardstock I cut with my Silhouette, using brown Ranger ink and clear embossing powder.  Instead of fussing with glitter and making a lot of mess, I made all of the cut-outs from glitter cardstock.  Love this stuff!  The embossed hearts are made with a Sizzix die, 'Lacy Heart', that embosses and cuts at the same time.  I used glitter card stock for those, too, and they turned out great. 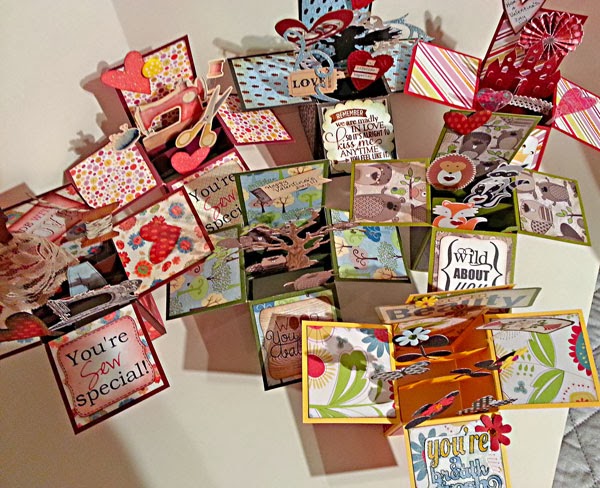 After the initial attempt at making one of these 'box' cards, I was hooked and went a little crazy.  I made seven Valentine's in all!  Fortunately, I had some die cuts that I had purchased and some die cuts that I had made and saved for 'some day'.  I have lots of great cardstock stacks on hand so I went through and chose two prints and a solid for each card.  The cardstock I chose for each one helped me define a theme for each card.  After that I went to the Silhouette online store and started looking for phrases that would fit my themes.  Most of them are combinations of phrases that I pieced together to say what I wanted.  After all - each has to be unique to the recipient.  I created the basic cards assembly line style using the wonderful tutorial that you can find here.  Once each was created, I started making and adding the die cuts and phrases. 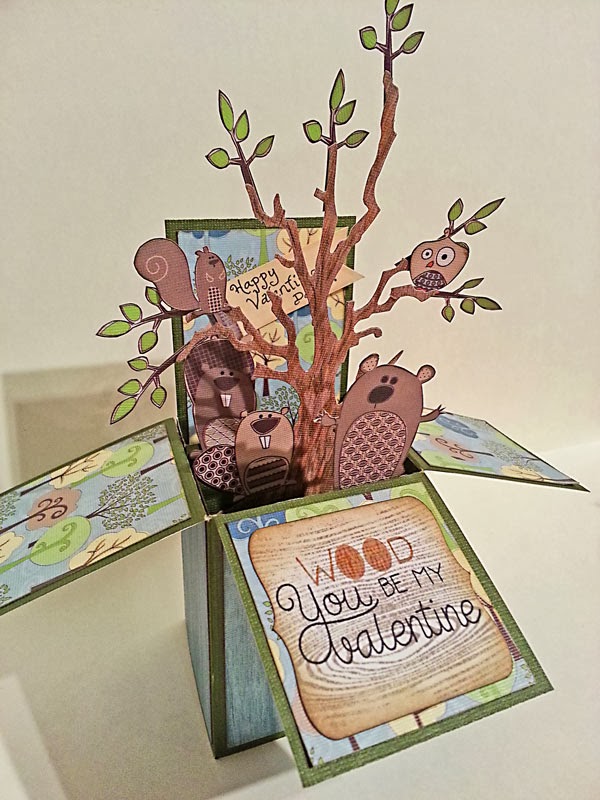 This is one of my favorites.  I love this fun cardstock by DCWV called 'The Green Stack'.  All of the papers are wonderful and I used them for several of the cards.  The tree is a Tim Holtz die cut that I cut from woodgrain paper.  I then enhanced the woodgrain with colored pencil to create a little carved heart in the trunk.  The little animals and tree leaves are all cut from a sheet of the cardstock.  The phrase was created using the Silhouette and then I stamped over it with a woodgrain rubber stamp I had made some time back.  This card probably took me the longest with fussy-cutting all of those cute critters and leaves. 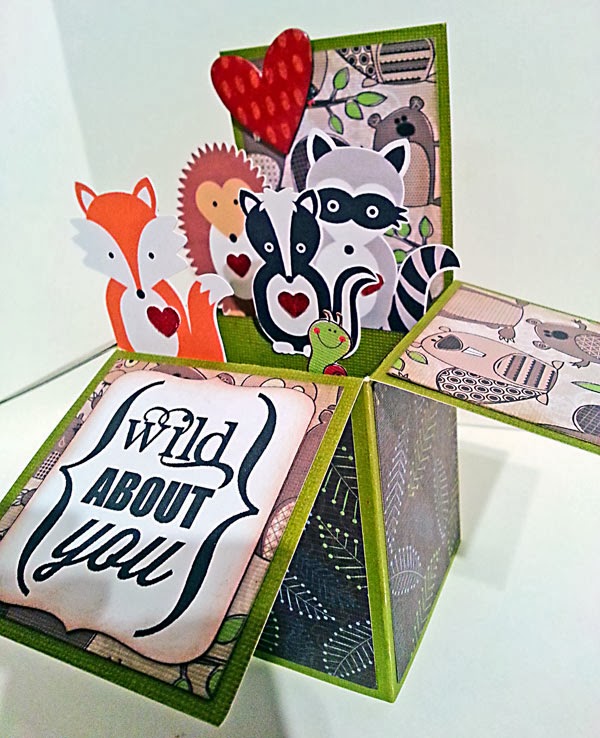 For the next one I didn't hold out much hope of finding animals at the Silhouette online store to go well with the paper but then I came across this animal banner that had plenty of cute critters to choose from.  It was easy to separate out the parts I wanted and then do a print and cut.  I added little glitter hearts to each one and I think they look so cute.  The little snail was cut from 'The Green Stack' paper and the basic box was made from this paper stack, as well.  Is that snail cute, or what! 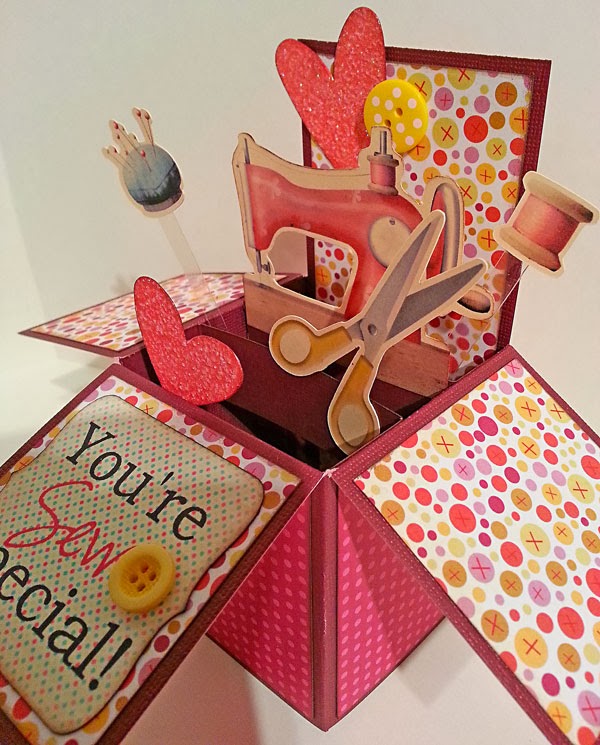 I made a sewing themed one for my granddaughter who is learning to sew.  These cut-outs came from a digital scrapbooking kit by Emeto Designs called 'Handmade'.  I imported some of the images into the Silhouette software and did a trace to create a cut line around each.  Then I did a print and cut.  The hearts were made with a Tim Holtz die from glitter cardstock. For our little princess I, of course, needed a castle which I found at the Silhouette store and cut from glitter cardstock.  The phrase was a Silhouette design that I added some bling to and the rosette and heart in the background were some I had made before with Tim Holtz dies and had in my stash. 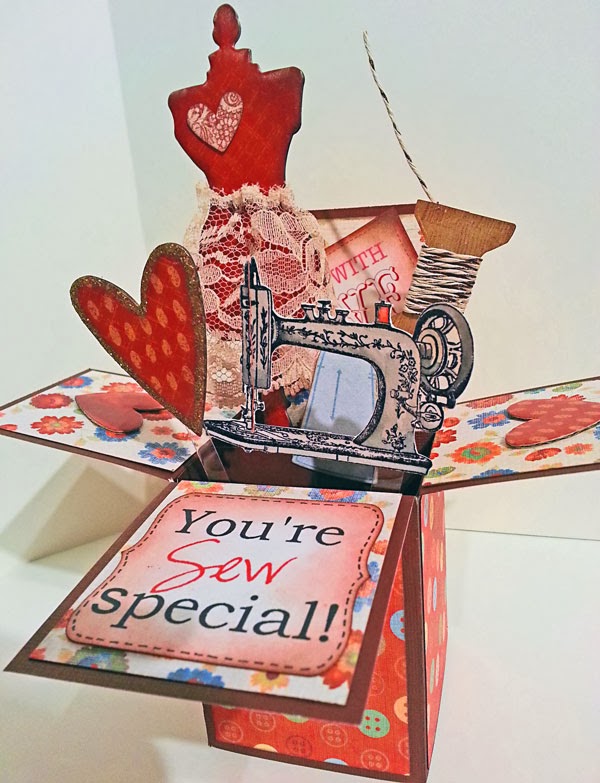 Last but not least, I made a sewing themed Valentine for my Mom and Aunt.  I haven't had a chance to deliver this one yet, but they probably won't mind if I show you in advance.  These are mostly die cuts that I made with Tim Holtz dies from recycled cardboard boxes and decorated.  The sewing machine I made with a custom rubber stamp and then embossed and cut out.
. 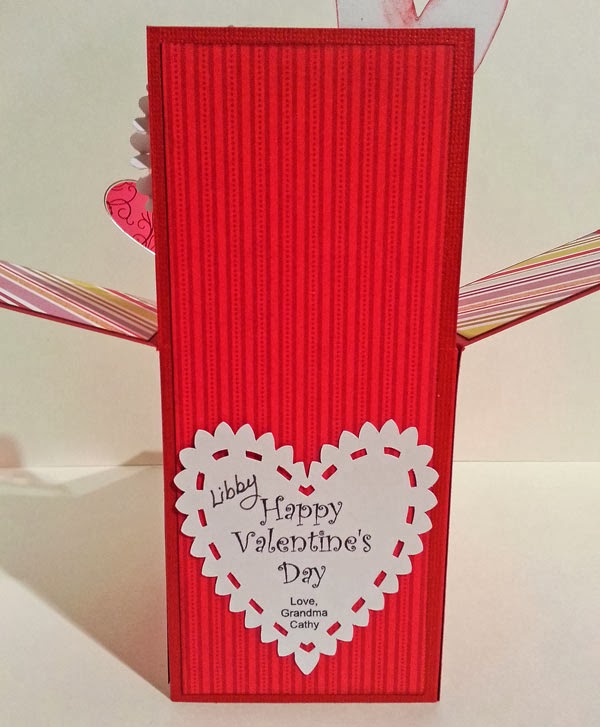 On the back of each I added a heart that I cut with my Silhouette (of course).  The pop-up cutouts are either suspended using strips of recycled packaging plastic or stuck directly to the supporting strips attached to the box.  I used a Scotch Advanced Tape Glider to stick everything together.  I found this to be invaluable since I didn't have to hold things in place while glue dried.  If I had used glue I would still be working on these!  :) 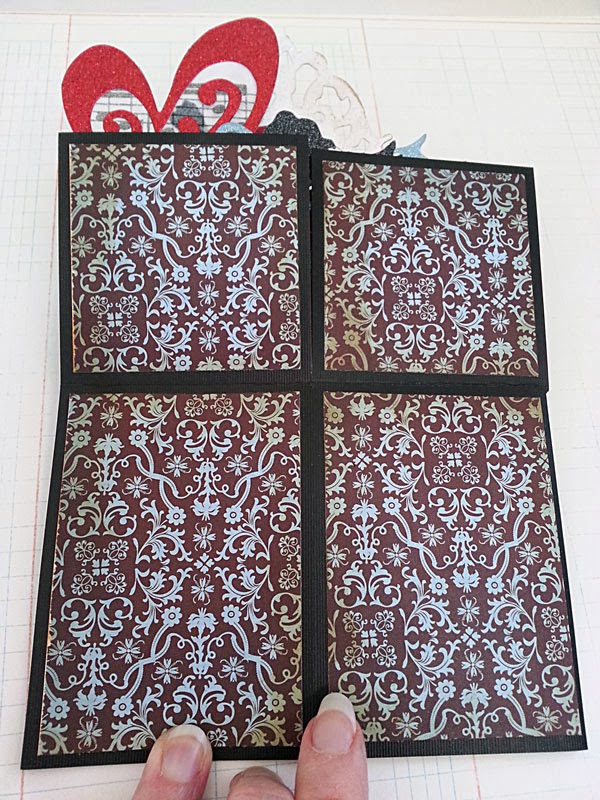 When the cards are folded they look like this and can be slipped in an envelope and mailed if you so desire.  With the extreme weather we have been having, I decided to hand deliver mine so that the tape wouldn't come lose and spoil the effect.  Plus, I had to include some fresh home-baked chocolate-chip cookies, which is also part of my tradition.  Doesn't that just make your mouth water...better go have lunch so I can have a cookie for desert.