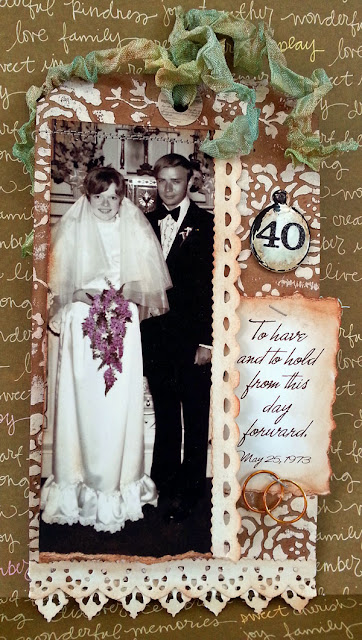 My husband and I reached a milestone this year - 40 years of marriage.  It doesn't hardly seem possible that it could be that long or we could be that old!!  :)  Time passes much too quickly.


Inspiration Emporium was having a little challenge for June called 'Something Old, Something New, Something Borrowed, Something Blue'.  So I didn't think that I should miss the chance to make a little something to commemorate our 40th.

I had a new embossing folder (Anne Griffin by Cuttlebug) that I wanted to try and being a little pinched for time, I decided to make a tag.  I had seen various embossed projects where the raised embossing had been highlighted with paint.  It took many attempts and a trip to the internet to figure out the best way to apply the paint so that it would highlight the embossed areas without getting on the background.  The answer was to use an ink brayer.  I squirted some ivory acrylic paint on my craft mat, rolled the ink brayer through it and then rolled over the embossed tag.  I still had problems with a little paint on the background areas, but I discovered that the roller on my brayer is not entirely even (a little flared on the ends) so there was no way to get a perfect result.  It just adds to the character - right? 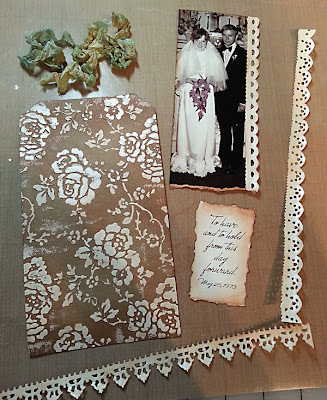 After I dried the paint, I went over the entire tag with some Vintage Photo Distress Stain and then went back with a soft rag and wiped it off of the white flowers to highlight them.  The white paint acted as a resist so the stain remained on the background but wiped off of the flowers easily.  I also painted the flowers with Glimmer Glam to give them some added sparkle.

I printed the sentiment and date on some paper and tore and stained the edges.  I had a couple of large jump rings in my jewelry findings that I added some antique brass Distress Paint to and attached for wedding rings.  The edging was die cut with the Tim Holtz Vintage Lace Sizzlits Die and stained with Vintage Photo Distress Stain.  I then painted them with Glimmer Glam and curled them slightly to give them dimension.

For the number tag, I used a blank TH Enameled Tag and antiqued it with Ranger alcohol inks.  Then I added some sticker numbers and attached it with a tiny fastener.  The ribbon is some seam tape stained with Distress Stains.

We look so fresh-faced in our wedding photo.  Ahhh, to be that young again....  But the years have blessed us with kids and grandkids and many happy memories.  So cheers to us!

Posted by Cathy Michels at 8:52 PM No comments: 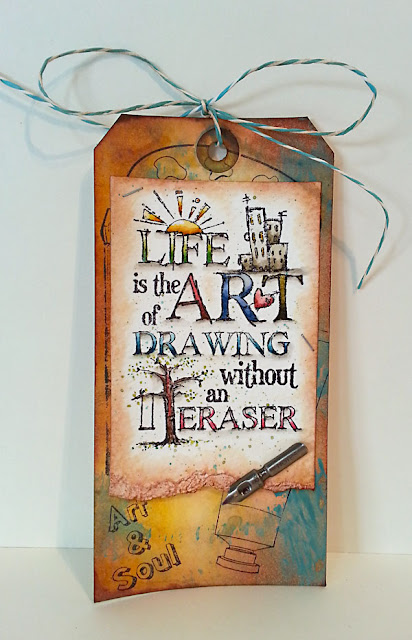 Tim's technique for June is stamping on watercolor paper and then coloring the image with Distress Markers and blending them with a brush.  You can see his tag and tutorial here.

He also shared a couple of hints on using and storing the Distress Markers.  When I first purchased them, I took them out of their plastic container and stood them upright in a jar.  They have dual tips and sometimes they seemed a little dry when I used them.  Now I see they are meant to be stored on their sides so that each tip stays inked and ready.  So I put them back in their original container (lucky for me I still had it) and stored them in a section of my top desk drawer. 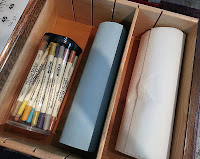 I followed Tim's directions pretty close in making my tag.  Just changed the images I used and attached the watercolor piece with tiny attachers instead of glue.  I also added a little distressed Tim Holtz paper string to the top to add some color and a pen nib for a little dimension.

Here are some photos of the process: 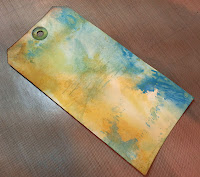 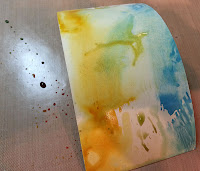 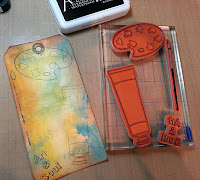 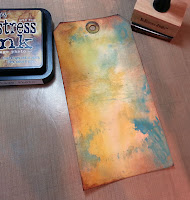 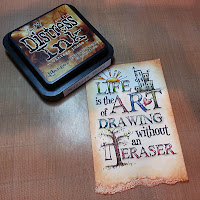 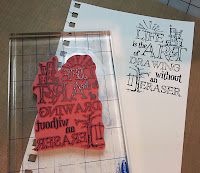 When I make cards and gifts I am usually putting the finishing touches on at the last minute.  Even though birthdays and holidays arrive at the same time each year, I have not yet learned to create ahead.  So it is hard for me to take the time to photograph these projects in the making.  Heck, it is hard for me to just get them done and me out the door on time!  (Ask my husband.)

Such is the case with my granddaughter's birthday folder.  I had to ask for it back so I could take photos of the finished piece.  :)  So to show you how I actually constructed it, I made a project for myself.

Last year when we visited England we spent some time in the Cotswolds and discovered this delightful little village called Blockley.  The streets are very narrow so there are no bus trips to this village, which made it the perfect place to take a quiet stroll and take some photos.  In fact, so many photos that it was hard to choose which ones to use - my folder grew quite large!  I would love to rent one of the little cottages and spend a month painting the scenes we saw.  It had a fun shop in the center that served as post office, restaurant, library, grocery store - and even a daycare on the side.

Putting this folder together the way I did makes it a very sturdy and lasting project but it also complicated the process a bit.  I will do my best to explain how I proceeded and hopefully it won't be too confusing. 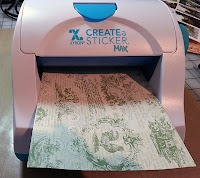 Some of the Tyvek wrinkled when I was running it through.  If this happens, peel the Tyvek from the backing where it is wrinkled and then smooth it back down, smoothing the wrinkles out as you go.  It is important to have it smooth before you add the cardstock and die cut it. 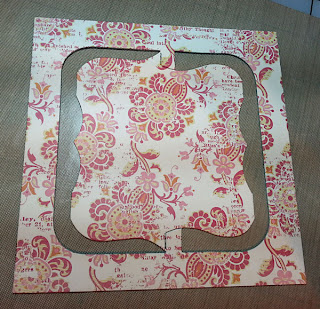 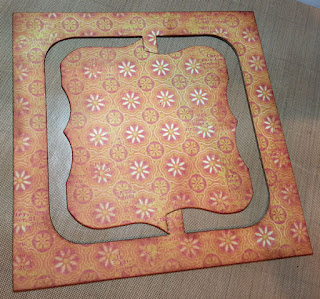 If you want to distress the edges of the panels with some Distress Ink as I did, then you will want to do that now before you apply the photos and begin putting the panels together. 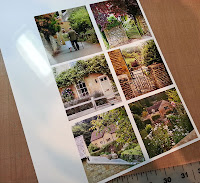 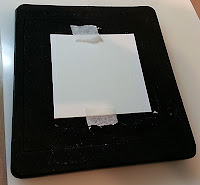 Next I die cut the photos using the Bracket Frame & Label Die with the photo side facing down.  (You can do a couple of photos at a time.)  I taped them carefully over the bracket label portion of the die to secure them before cutting. 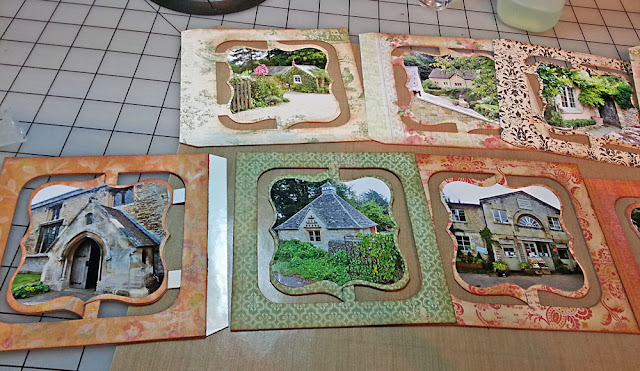 I laid out all of my panels and attached a photo to each.  In the above photo, the back panels (cardstock on Tyvek) are on the top row and the front panels (cardstock on cardboard) are on the bottom row.  Notice the top row has hinge tabs intact and the hinge tabs are facing to the left.  The bottom row has the hinge tabs removed but they would be facing to the right as you see on the first panel in the row (which has already had the back applied).

1.  The first panel is simple, just peel the backing off of the Tyvek on the corresponding back panel (leaving the backing on the hinge tabs), line up the panels and adhere back to front.

2.  Now lay the next front panel face down on your first finished panel, peel off the backing from the hinge tabs of the first panel and wrap them around the second front.  It should look like this. 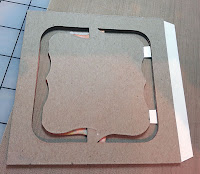 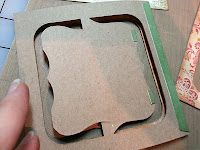 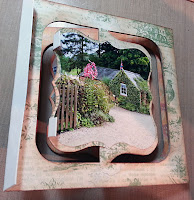 3.  Apply the corresponding back to the second panel. Bend back the long hinge and remove the backing from that hinge only.

4.  Adhere the next front panel to the long hinge, but not to the small hinge tabs. 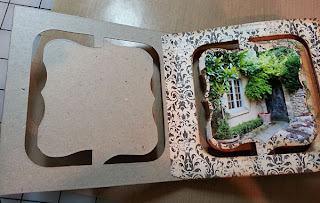 5.  Adhere the corresponding back to the third panel smoothing down the frame portion only - not the photo portion.  Close the folder.  Remove the backing on the short hinges of the previous panel and slip them between the front and back photo layers of the third panel and then smooth this part down to seal.  This part is a little tricky but makes sense once you begin putting your folder together.

Repeat steps 2-5 until you have attached all of your panels.  Cut the hinge tabs off of the last panel once it is all assembled.

As I mentioned before, it takes a bit of work and concentration to put the folder together this way, but it creates a very sturdy finished product. If you decide to give it a try, it may be best to commit to just a few panels until you understand the process. 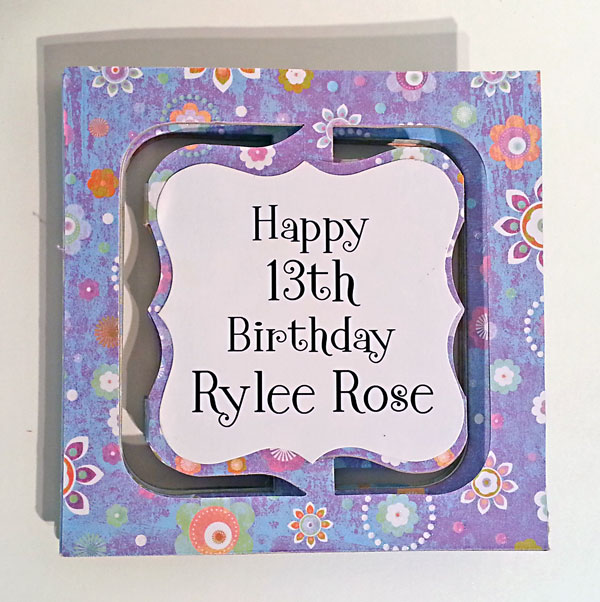 A few years back I started giving handmade cards to family and friends on special occasions.  This tradition has grown into more elaborate cards each year!  :)  I try to create a card that is special to the person or occasion.  It's a fun creative challenge and a fun way to incorporate tools and supplies I have in my stash.  I love taking photos and like to use them in my projects, but I seem to get a little overwhelmed by the idea of creating a whole scrapbook.  So this is a way to share those photos in small doses.  Or, as in this project, some photos others have shared with me.

Our oldest granddaughter turned 13 a couple of weeks ago and I wanted to create a keepsake for her that included some of my favorite shots of her as a little girl.  She is growing up so fast!  When she was small, one of the comments we would hear most often was that she looked just like a Precious Moments doll.  You can't deny she is a cutie! 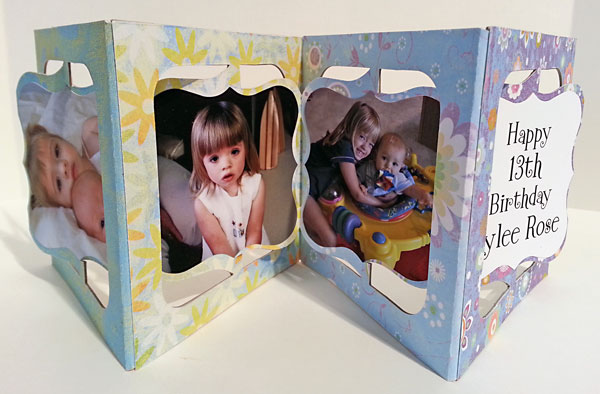 I used Sizzix Dies - the Flip 3-D Accordion Album to create the folder and the Bracket Frame and Label to cut out the photos.  I wanted to incorporate lots of photos, so I covered both sides with them. 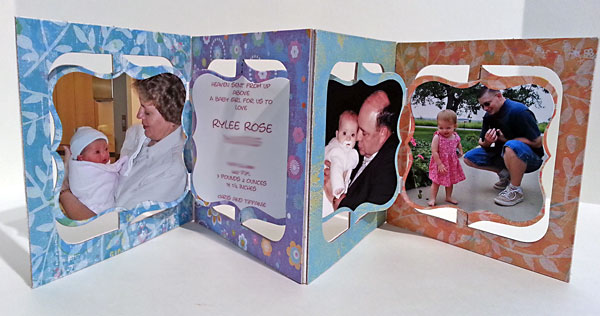 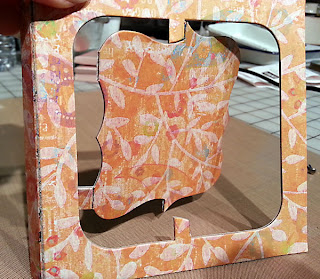 I used carton cardboard (a graham cracker box) for the base and covered it with patterned cardstock.  However, the hinged area cut completely through.  Even though I knew I could probably eliminate that problem by using a crease pad when I ran it through the machine, I wanted to find a way to make the hinges more durable.  So I used a house-wrap product called Tyvek.  This stuff is extremely hard to tear and can also be found in your office supply store in the form of Tyvek shipping envelopes.  I can't take credit for coming up with this idea - I first saw it on annes papercreations.  I will show you exactly how I used it in my next post.  So see you then!

As always, thanks for stopping.