It's 'Tim Tag Time' again. This time Tim focused on different techniques using the new distress paints.  You can view Tim Holtz April Tag and his tutorial on his blog.  Since they are brand new, it was a little hard getting the paints. But I really wanted to try them, so I persevered.  :)  No sacrifice is too great for new supplies...

We are having a normal April here, with lots of rain, so I decided to make that the theme for my tag.  Plus, I have been wanting an excuse to use the Umbrella Man die cut. 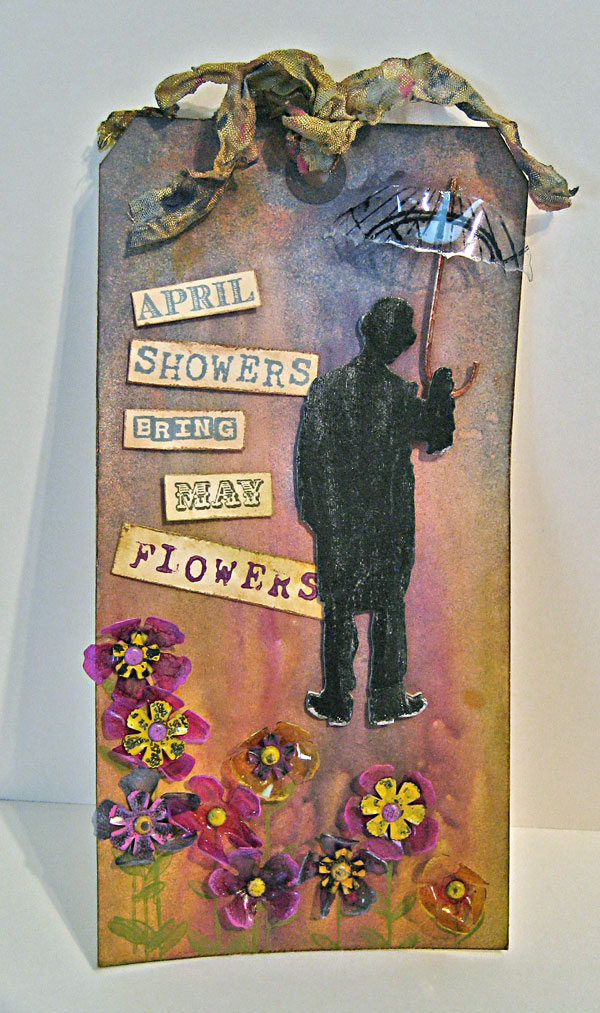 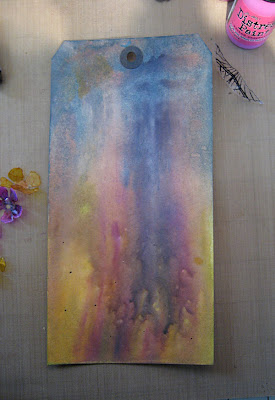 The first step involved dabbing multiple colors of paint on my craft mat and then dragging the tag through the paints to create a mottled background.  I wanted dark blues at the top and brights at the bottom, so I arranged the colors on the mat accordingly.  Tim also suggested adding lots of metallic paint to the mix.  The process took some experimenting before I got something I liked.  The first time I drug the tag across too many times and the paints became a muddled brown.  The second time I used too much water and I had a wet mess.  But, as they say, the third time was a charm and I got a result I was very happy with.  You can see the colors I used in the photo.  The bronze paint gave the whole thing an iridescent glimmer.

The next technique I wanted to try was cutting plastic with the dies and then shaping it with a heat gun.  I didn't have any of the art plastic Tim recommended, but I did have lots of plastic packaging. (Save that stuff - it's cool to play with.) I cut the umbrella with the Umbrella Man die and then stamped it by laying it on a globe stamp that I had inked up with black Archival Ink.  (The lines on the map looked like the ribs of an umbrella to me.)  I then heated the plastic with my heat gun and shaped it to look rounded.  I kind of melted the first one and had to cut a second one, but what the heck, it was just packaging that was going into the recycle bin. 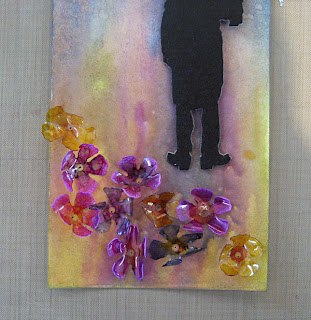 Next, I cut a bunch of small flowers out of the same plastic with the Tattered Floral die and colored them with alcohol inks.  I punched a small hole in the center of each, shaped them with the heat gun and dabbed a little of the distress paints on the edges to add some highlights.  I laid them out on my tag for placement and made a small dot on the tag where each flower center was.  This gave me an idea where to place the flower stems and where to punch the holes for attaching the flowers. 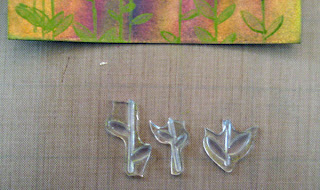 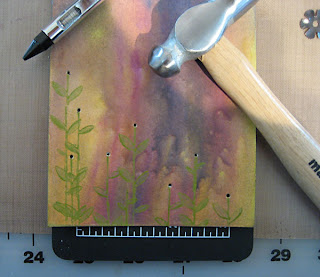 I once watched a video online about getting more use out of your acrylic stamps by cutting them apart and using the various pieces in different ways.  I had some flower stamps with stems and leaves so I cut these off and used them to stamp stems and leaves on my tag with Peeled Paint Distress Paint.  I was careful to dry the stems as I went so that I wouldn't smear them.  (Cutting your stamps apart doesn't damage them in any way.  You can re-join them on your stamp block when you want to use them as they were intended.)  I like how the paint worked with the acrylic stamps. When I applied pressure to the stamp, the paint kind of squished out to the edges creating an outline.  Just be sure to wash the paint off of the stamps before it dries.

I punched a hole in the tag at each dot so that I could attach the flowers with brads. The flowers needed a little extra something so I colored some metal floral pieces (Tim Holtz Idea-ology) with the distress paints by just dabbing it on and then drying the pieces with a heat gun.  I dabbed paint on the ends of the brads, dried them and then attached everything to the tag.  The paints come in bottles with sponge applicator tops, so it is quite easy to use them for all sorts of things without having to clean up any brushes.

I cut Umbrella Man out of a black box I had salvaged and smeared a little Antique Pewter Distress Paint across him with a paper towel to make him look rained on.  I also dabbed the bottoms of his feet and the edge of the umbrella to give the appearance of water.  The handle of the umbrella was made from a piece of copper wire I salvaged from the re-wiring project going on next door. 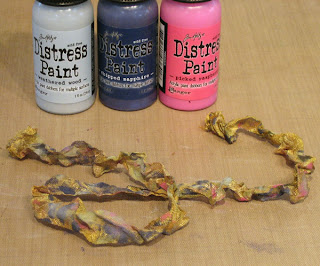 Using various rubber stamps, I stamped the words on some manilla card stock, distressed and inked the edges and then attached everything with dimensional glue dots.

For the ribbon, I started with some seam tape I had dyed another time in shades of gold with various Glimmer Mists.  I dabbed various colors of distress paint on the wrinkled ribbon making it look almost like an artist's clean-up rag.  I tied it to my tag and called it done.  :)

Posted by Cathy Michels at 5:47 AM